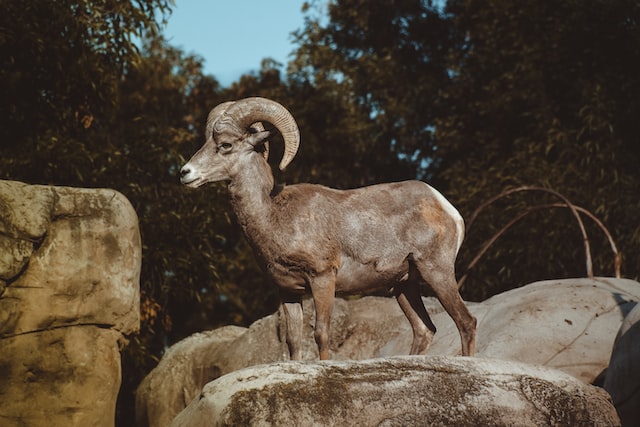 In astrology, animals represent a huge constituent of Zodiac signs, and Aries is no different, as it is represented by a ram. The following are all of the Aries spirit animals, and the meaning behind them:

Aries is represented by the ram in the Zodiac wheel. This is because a golden ram is represented in Greek mythology, and is connected to Aries, but why truly a ram?

Here are the following reasons that Aries’ spirit animal is the ram:

Rams have a history of being sacrificed

There are many myths and tales, and even religious texts, where rams have been sacrificed. It makes sense that a ram was sacrificed in the Old Testament, as this is the beginning of time according to the Bible, and Aries is the very first sign.

Although Aries men are strong and confident, they are too impulsive and risk-taking, and are often killed on the battlefield. This has to do with a ram being sacrificed, at too young an age.

Spiritually, rams connect to the imagination, inspiration, as well as new stimulation of the mind, supported by an immense amount of energy to act upon these inspirations. Aries are ruled by Mars, giving them more than enough energy to get through any task.

They often settle arguments through fighting

Aries is the most confrontational sign, and people who are Aries, often act before thinking. Rams literally butt heads to settle arguments, and Aries people have no problem getting into big physical fights to sort things out quickly. They can be quite aggressive!

The Native American Indians associate Aries with a Red Hawk, according to their “Earth Astrology.” These are the reasons why:

These amazing birds go after lots of prey, including their favorite, rattlesnakes! When they capture rattlesnakes, they tear off their heads immediately for their own protection, as they are not immune to its poison. Even though they know the danger ahead, they will still forge ahead and go for their prey! This is similar to Aries’ attitude.

They have red tails

Red hawks have red tails, the color associated with Aries, as it is a Fire sign. Aries gravitates towards the color red, as it stands for blood, energy, vitality and life – everything that Aries is about. Many Aries people have red hair, or will dye their hair red!

Both parents help raise the young

When these female birds lay eggs, and the babies (eyases) hatch, both parents look after them. Aries may be super independent, fierce and courageous, however, when they have children, they often become their number one priority, and they pour a lot of attention and affection onto them.

There are a few different reasons that Aries has the cheetah as one of its spirit animals. Here they are:

These big cats are the fastest animal on earth

Cheetahs have a running speed of up to 70 miles per hour. There’s nothing on earth they can’t really catch. It’s the same with Aries, when they want something, they target it, and move very fast to get it!

They are slim and athletic

These animals are built for speed – they are one of the slimmest of all the big cats, so that their bodies can run faster. They are very athletic and love running after their prey, and climbing trees. Similarly, Aries is the sign associated with athleticism. They are not usually overweight, and have athletic builds that are either muscular or slim.

When cheetahs mate, the male will pair off with a female for up to three days, and will mate with her up to 5 times a day. Aries are also known to have incredibly high sex drives, as they are extremely masculine and passionate, and will often want to get intimate with their partners a few times per day.

Tasmanian Devils are also an Aries spirit animal. Here’s why:

They can be very aggressive

If a Tasmanian devil is competing for food, or it feels like it’s under attack, it can be very aggressive. It will show its teeth, lunge and scream. Similarly, Aries people will attack if attacked. When it comes to “fight or flight,” they definitely fight, and are known to be aggressive!

Their bites are excessively powerful

Tasmanian devils’ bites are so excessively powerful, they literally crush bones with them. Aries, too, is endowed with enormous strength and power, thanks to their ruling planet Mars which affects them this way.

Tasmanian devils are not cute and cuddly

Although these “devils” look exceptionally sweet, they are not meant to be picked up and cuddled, as their fur is very coarse. Aries is also not the most “huggable” sign. They feel uncomfortable with too much affection (unless it’s from their partner or children).

Soldier ants are the final spirit animal of Aries. Here are some reasons why:

They have an enormous amount of energy

Soldier ants have so much energy to do what they need to do every day. Just like Aries, who is the most energetic of all the Zodiac signs.

They protect their colonies

These ants actually protect their colonies, and help to carry the prey that is the heaviest to where it needs to be. Aries are also protectors of their families and the people they love. They are always the warriors, the “Maximuses” in any “Gladiator” film!

Soldier ants work together as a group

Soldier ants do their job so well, because they work together as a physical social network. Although Aries likes to lead, they work exceptionally well in social settings and groups.

Which Aries Spirit Animal Represents You?

Aries is the first sign of the Zodiac and comes with special characteristics. Their spirit animals are very unique indeed! Whether you’re dealing with a ram, red hawk, cheetah, Tasmanian devil, or soldier ant Aries, know they will always stick up for you, protect you and will always love you passionately, should you have a loving and romantic relationship with them!

Which Aries spirit animal best represents you? Leave a comment with your choice!