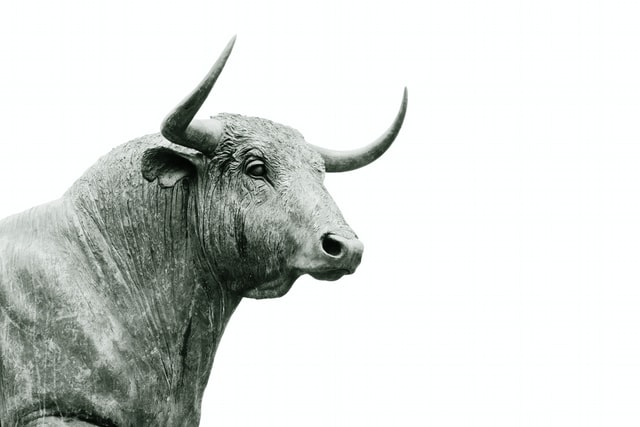 Seven animals represent the different Zodiac signs in Astrology. Four humans represent four signs – the twins of Gemini, the virgin of Virgo, the centaur (half human) of Sagittarius, and the water bearer of Aquarius, and one inanimate object represents Libra (the scales).

The most well-known Taurus spirit animal is the bull. However, there are 4 other animals that both represent the personality and traits of a Taurus person.

The bull represents Taurus. What follows next are the five spirit animals that connect to Taurus best:

The bull is the animal most connected to Taurus. One of the biggest connections is the fact that, just like Taureans, they are so stubborn. In fact, Taureans are the most stubborn Zodiac sign of all.

Here are other reasons that Taurus’ spirit animal is the bull:

The myth of the bull relates to Taurus’ sexuality

In Greek mythology, the great god Zeus turned into a bull to abduct the Phoenician princess Europa, and seduce her. That is why Taurus is connected to the bull – the constellation of Taurus commemorates the story of Europa’s abduction by Zeus, who transformed into a bull to do so.

Taureans are extremely sexual, and will woo the people they’re attracted to for days (read more about Taurus-Scorpio compatibility here), and weeks, on end.

They have no problems with one night stands either. They’re extremely sensual and one of the most sexual signs of the Zodiac.

The bull has a temper

Bulls really do see “red!” when angered. The anger builds up in them, just like it does in Taureans. It takes a while for a Taurus’ temper to really reach its peak, however, when it does, they go ballistic, and are “bulls in a China shop” that can destroy everything around them, both materially and even socially and psychologically. They can be extremely toxic when angered.

Bulls are large with thick necks

These animals have thick bones, and extremely thick necks. Their heads are bony, and they have ridges over their eyes that are protective. Taureans are also often bulky in appearance. They, and Taurus ascendants, often have thick necks, and bumps on their foreheads that symbolize the horns on a bull’s head. They also often have thick eyebrows.

According to the Native Americans, beavers are the spirit animal of Taurus. Here’s why:

These animals work well in nature

Beavers create dams, lodges and canals which help to keep old ponds and create new ones. In this way, other animals and plants can live there. Taureans work equally well in nature. They are all born with “green thumbs,” and can magically turn any desert of a garden into a green paradise, filled with fruit trees and gorgeous flowers. Gardening is one of Taurus’ favorite hobbies.

The beaver is a hard worker

This animal is exceptionally self-sufficient and hard-working. Yes, it is very true that Taureans can be exceptionally lazy; however, when they need to work, they work very hard! The beaver will build what it needs to, to keep protected and safe and will always maintain their home. Taureans, too, will always do the work they need, to get the job done and earn their pay! They also happen to be the most self-sufficient sign of all.

Flamingos are stunning big, pink birds, and these are the reasons they represent Taureans:

Flamingos are flamboyant and stunning

These gorgeous birds are admired by many. Their pink feathers make them stand out among the bird world. In fact, a group of flamingos is called a “flamboyance” of flamingos. Like flamingos, Taureans can be very flamboyant!

Taureans rule money and can be very materialistic. They love what money can buy, and love adorning their bodies with the most beautiful jewelry, clothes and other accessories. When they leave home, they truly like to show off their best threads.

Their color comes from the food they eat

Flamingos are pink from eating algae which has carotenoid pigments inside. Just like flamingos, Taureans change color (they get really red in the face when they drink alcohol), and their moods change incredibly from too much caffeine and sugar. Food really affects their outer appearance and behavior.

They also put on weight incredibly quickly and their stomachs will start popping through their shirts and dresses pretty soon, as in a few months, after eating too much junk food.

There’s a courtship that takes place among flamingos, in order to attract partners. Taureans can be very romantic , and really court those they want as partners. They’ll buy flowers for their partners, take them out to romantic, candlelit dinners, and will even buy them gifts like expensive boxes of chocolate and perfume.

These are one of the cutest animals that many keep as pets. These are the reasons they connect to Taurus:

Pigs love to eat and eat and eat. That’s where the saying, “don’t eat like a pig,” comes from. Taurus is a sign connected to food. Most foodies in life will be Taureans (and Cancerians), or will have planets connected to Venus.

Venus rules Taurus, and is all about the senses, and Taurus enjoys their sense of taste. Taureans often have pot bellies, just like pigs. Go to any buffet breakfast, and the people with the highest piles of food on their plate will be Taureans!

Pigs love the comfort of home

Pigs love living inside homes. They make wonderful domestic pets, and many people around the world keep them inside. Taureans are happiest at home, they make their homes as beautiful and comfortable as possible, so that they never need to leave it.

These are very affectionate animals

Affection is a big thing with pigs. They will sit up on your lap and cuddle with you, and fall asleep with you while the TV is on. Taureans are also very affectionate, and when they are alone with the person they love, or are into, they will pour on the affection.

Grizzly bears are also a spirit animal of Taurus. These are the reasons for this:

These bears can be lazy

Studies have shown that grizzly bears can be quite lazy – and so can Taureans. If all a Taurean could do all day was laze in bed and eat, they would. Taureans prefer the easy life, and actually work very hard, so that they can accumulate a lot of wealth to save and retire early.

Grizzlies are protective of their young

Mother grizzlies are exceptionally protective of their young, to the point that most human kills from grizzlies occur when they come too close to grizzlies’ baby cubs. Taureans are also fiercely protective over their children. They will literally tear anyone apart that hurts their kids.

They love their food

Grizzlies eat up to 30 pounds of food per day. As mentioned earlier, Taurus people don’t really know when to stop when it comes to eating. Thanks to Venus ruling them, they love the sensuality of taste, and can’t get enough of delicious tasting food!

Taureans are stable, faithful, mostly down to earth, loyal and reliable. Whether you’re dealing with a bull, beaver, flamingo, pig or grizzly bear, know that you’re experiencing a soul that will remain your true friend for life, and will hardly ever let you down!